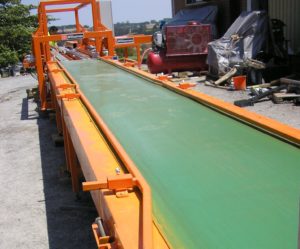 The Flat Belt model (pictured) moves trays through filling, seeding, covering and watering processes on our seeding lines. In particular, it’s used to move soil from the feed bin to the filler. Our standard range includes lengths of 1 to 6 metres. We also have two different widths available – 300m wide or 550m wide.

The Strip Belt model is made from white polyurethane white strips, using 2 or 3 strips, depending on function.

Our Chain-Driven Conveyor was constructed to support the weight of filled, seeded trays moved in blocks of 150 trays, a feature of the Williames ST2500 Seeding Line.

Williames Roller Conveyor is optional with the Williames Pot Fillers, and in conjunction with other products.

Have a question? Want a quote? Enquire below!